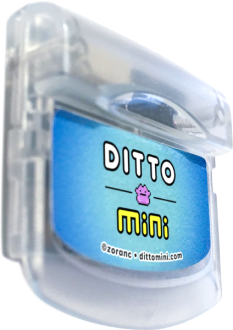 The current flash cart on the market is the long-awaited Ditto Mini, which can be found on the official site, along with full details and order information. They do not include a Micro USB (required for use on the flasher). As of the time of writing, there are a few packages offered:

One DITTO mini circuit board, and a USB flasher.

One DITTO mini circuit board, a USB flasher, and a triwing screwdriver.

One DITTO mini circuit board, a USB flasher, a triwing screwdriver, and a Pokémon Mini game (for use as a shell donor).

One DITTO mini circuit board.

One flasher unit only.

Again it took some time until we can offer you new flashcarts. The Rev2.1 carts are almost the same as Rev2 with a few small changes:

The prices reflect the time that is needed to assemble the carts and flashers. The flasher takes most of the time to build so it’s more expensive than the flashcarts.

So a set of flashcart + flasher is 90 Euros. That’s quite a lot, but these carts are home-/hand-made and tested before they get to you.

After five years of development and lazyness *cough* we are now selling a new version of these flashcarts. This time it features a dedicated programming connector which uses a serial interface to transfer data to the flashcart. It is not needed to remove the cartridge for programming.

The first revisions of PokeCard512 did protrude from the PM and did not fit into a cart case. PokeCard512 Rev2 utilizes a cheap trick to make it fit into normal cart cases by placing the flash memory at the bottom of the PCB and cutting a big hole into the original cart case – see the pictures for details.

Now some techy info on the cartridge:

The carts and flashers are currently on sale, they are produced by Lupin in small quantities.

Ordering details: Ordering can be done by sending an email to Lupin. You will then receive more details about prices, shipping, payment etc.

Following JB’s original cart design Team Pokeme built a bigger lot of Flashcarts in 2005/06 featuring a new USB programmer built by Lupin. These were the first carts that really were publically available and the first that were labeled “PokeCard512”. The biggest disadvantage of these carts was that they needed a programmer with a genuine PM cart edge connector.

In these dark times many perfectly functional PMs lost their lives just for their precious cart edge connector.

JustBurn and pop built some more Flashcarts using a 512kb NAND Flash memory and a XC9536 CPLD. The programmer was a slow parallel port device. During the development of PokeCard512 Rev1 we noticed that the parallel port programmer outputs 5V and the CPLDs on the flashcart weren’t 5V tolerant – it’s surprising that this actually worked for the first few cartridges.

The first Flashcart for Pokemon Mini was made by Darkfader using a PSD memory from ST (it’s a Flash+PLD combination).

A revision of Lupin’s original Poke USB Linker. Parts have been relocated for a more inline design, a voltage regulators with different packages are supported, a resistor has been put in series to N_PROG line and N_PROG is now also connected to cart A20 signal.

Canto wait to get some of those. Would pay even much higher price. With a custom self made ROM it makes for a very neat, small gift IMO.

Hi I would llke to buy a flash cart, how much are they please?

Hi!
I would like to buy on pokecard flash rev.2 in order to be able to review some of the homebrew in a future issue of ReVival magazine (100% homebrew on retro systems).
I am located in France, so what about shipping cost for that?

Thanks! And happy new year!

Wohooo! Carts available to general public! How cool is that!!!

how much dose it cost

Where can I get a flashcart?

need a cart. how can i get this?

I finally got a PokeMini and now I need a PokeCard512, but Lupin is the only way to get it and it seems he’s been gone for months and that he’s been out of the flashcarts for YEARS!?!

awww that sucks, I’m a few years late in getting one.(such a long time ago I saw this) lol

It seems you won’t sell the Flash Carts anymore? I’m very interested in one or two of them. Please continue your work on them.

I want to sell my Pokecard512. I´m from germany, too. Please PM me in the forum 🙂

I’d really like to buy a flash cart. If anyone is willing to sell one or knows where I can get one, please PM me!

See forum posts… I have one card to sell

hello
you know when new units will have stop?
I would like the set of flashcart + flasher
thanks

Umm the website doesn’t work. Chrome can’t find it. How much do they cost, and where do we get them and are there any left?!

hi! I need a pokecard rev 2.1, im interested in programing games or homebrew for it, im from spain, how I can get one? thanks for all.

(sorry for my bad english)

Wow, awesome work! I wish I have got a Pokémon Mini…

hey there i would like to get one of those recent flashcards, i cant find a link to contact yoou, so im trying this way.
would you please contact me for the details.
looking forward to hearing from youo
best jecksn

Hi, are this kits still produced and sold? if so, could you be so kind as to send me further info via email?
Thanks in advance.

Hello is this still available to order? If yes, please let me know? thanks

Please tell me， where I can buy this flashcard, thank you

I was wondering if these are still available at all or if there is anyone on here who owns a flashcard that they would be willing to sell?

heaven6502,
there are new flash carts in production currently. check out the forums, user Zoranc is the one who is working to have them made.

With Metal Jesus Rocks doing an episode on the Pokémon Mini, there may be newfound interest in the handheld. Any plans on flash carts? I would love to finally get one. Anyways have a great day!

Yeah! Really looking forward to the new carts! I’ve already offered on the forums to provide assistance with production seeing as how my husband does PCB prototyping for a living and such, so we have quite a lot of resources at our disposal over here. We’ve even worked on large scale production for retail, so no worries, Zoranc and friends, we got your back!

I just found one for 20 U.S dollars! Unfortunately I dont have any games for the console as the games are hard to find. If anyone can give me some information on where to purchase a flash cart for the mini please leave a response. Thank you

Hey. How can I buy a flash set?

Hello, and firstly let me say thank you for your hard work in this flash community and for your ingenuity regarding the creation of these flash carts. To my understanding, you are a one man army in the fight to produce a worlds worth of these flash carts? How long is your waiting list? If there is a list, may I be placed on it? Also, what is the price of the flash cart? Is there an option to pay more for priority production? I understand if not. Thank you again for your enormous contributions, Happy New Years 2019!

Just a heads-up to anyone looking to purchase a flash cart: The DITTO mini made by our very own zoranc are up for sale now – out of stock as of the time I write this, but more inventory should be listed within the next few days.
Feel free to check out http://www.dittomini.com for all the details. There’s also a link to the store, and to an email list for updates related to the DITTO mini flash cart.

So no flash carts available as of late 2020/early 2021… 🙁
Any plans for the future or us late adopters are doomed?

Pls I would love to buu this